Take a simple 4.25″x4.25″ tile, engrave it with a picture, back it with felt and combine with others in an engraved box and you have a fantastic gift….Engraved Coasters from Ric’s Leather and Engraving!

We have a special series of coasters that we call “Iconic Tulsa” based on 12pictures of historic Tulsa Landmarks. These are grouped into six different sets.Price is $50 for a boxed set, or $9.25 for individual tiles. (See below for a more detailed description of the pictures used.)

Tulsa is nestled in the northeastern quadrant of Oklahoma and boasts a widely diversified business base, including aerospace, telecommunications, manufacturing, construction, high technology, healthcare, education, transportation and energy. Tulsa, one of “America’s Most Livable Communities,” is known as the Mecca for arts in Oklahoma. Art deco masterpieces are prevalent in many of our downtown buildings and churches.

Cain’s Ballroom is a historic music venue in Tulsa, Oklahoma, United States, built in 1924 to serve as a garage for W. Tate Brady‘s automobiles. Madison W. “Daddy” Cain purchased the building in 1930 and named it Cain’s Dance Academy, where he charged 10¢ for dance lessons. The academy was the site of The Texas Playboys‘ (Bob Wills) first regular radio broadcast, and they continued to play there regularly. Larry Schaeffer purchased and refurbished the building in 1976 and renamed it Cain’s Ballroom. The building was listed in the National Register of Historic Places on September 4, 2003.

The Golden Driller, a 76-foot-tall, 43,500-pound statue of an oil worker, is the largest fourth-tallest statue in the United States. Originally built in 1953 by the Mid-Continent Supply Company of Fort Worth for the International Petroleum Exposition, it now belongs to the Tulsa County Fairgrounds Trust Authority. The statue’s right hand rests on an oil derrick which had been moved from a depleted oil field in Seminole, Oklahoma. In 1979, the Golden Driller was adopted by the Oklahoma Legislature as the state monument.

an art museum, opened October 25, 1939, housed in a 1920s villa, situated on 23 acres of formal and informal gardens. The original structure is the former home of Oklahoma oil pioneer Waite Phillips and his wife Genevieve (Elliott) Phillips. An Italian Renaissance villa, the Philbrook was designed in 1926 by Kansas City architect Edward Buehler Delk. Construction on the mansion was begun the same year by the John Long Company of Kansas City and completed in 1927. Originally called Villa Philbrook, the home featured 72 rooms on 23 acres of grounds. The expansive grounds contain elaborate gardens inspired by Villa Lante, an Italian country estate north of Rome designed by Giacomo Barozzi da Vignola in 1566. In 1938, Waite Phillips donated the Villa Philbrook and surrounding gardens to the city of Tulsa, in hopes that the estate would be used for art and cultural purposes.

located northwest of downtown Tulsa, the museum houses the world’s largest, most comprehensive collection of art of the American West, as well as, a growing collection of art and artifacts from Central and South America. The museum is named for Thomas Gilcrease, an oil man and avid art collector.

U.S. Route 66, also known as the Will Rogers Highway and colloquially known as the Main Street of America or the Mother Road, was one of the original highways within the U.S. Highway System. Established on November 11, 1926—with road signs erected the following year, the highway became one of the most famous roads in America, running Chicago, Illinois, through Missouri, Kansas, Oklahoma, Texas, New Mexico, and Arizona before ending at Santa Monica, California, covering a total of 2,448 miles. It was recognized in popular culture by among others the hit song “(Get Your Kicks on) Route 66,” the Route 66 television show in the 1960s, and Disney Pixars “Cars.” Route 66 served as a major path for those who migrated west, especially during the Dust Bowl of the 1930s, and it supported the economies of the communities through which the road passed. People doing business along the route became prosperous due to the growing popularity of the highway, and those same people later fought to keep the highway alive in the face of the growing threat of being bypassed by the new Interstate Highway System.

These hands, designed and cast in Juarez, Mexico in 1980, stand 60 feet high and weigh 30 tons, the largest bronze sculpture in the world. Originally created as part of Oral Robert’s “City of Faith,” the hands were moved to the entrance drive of the university when the “City of Faith” closed.

Built as a Gulf Oil Gas Station in 1924, the Blue Dome Building—located at Second Street and Elgin Avenue—was a historic stop for all those traveling on the famous Route 66 from 1926 to 1932. It now serves as an information desk/office for the Blue Dome Arts and Entertainment District.

Born in Lawton, Oklahoma, Russell attended Will Rogers High School in Tulsa. Russell began his musical career at the age of 14 in Tulsa’s nightclubs. He and his group The Starlighters, which included J.J. Cale, Leo Feathers, Chuck Blackwell and Johnny Williams, were instrumental in creating the style of music known as the Tulsa Sound. After settling in Los Angeles, he was known mostly as a session musician early in his career. As a solo artist he has crossed genres to include rock and roll, blues, and gospelmusic, plus country and western using the name Hank Wilson. Over his career he has played and/or collaborated with artists as varied as Jan & Dean, Gary Lewis, George Harrison, Gram Parsons, Delaney Bramlett, Ringo Starr, Doris Day, Elton John, Ray Charles, Eric Clapton, The Byrds, The Beach Boys, The Ventures, Willie Nelson, Badfinger, Tijuana Brass, Frank Sinatra, The Band, Bob Dylan, J.J. Cale, B.B. King, Dave Mason, Glen Campbell, Joe Cocker and The Rolling Stones. During the 1960s and ’70s, Russell owned the Church Recording Studio on 3rd Street in Tulsa. Russell still records there frequently . His former home on Grand Lake, still contains the dining room table and chairs made from church pews from his Church Studio. On the property stands a private recording studio that has hosted many musicians, including members of The Beatles.

The Boston Avenue United Methodist Church, located in downtown Tulsa and completed in 1929, is considered to be one of the finest examples of ecclesiastical Art Deco architecture in the United States. It was placed on the National Register of Historic Placesand designated a National Historic Landmark in 1999. Design of the Church is largely credited to two individuals: Adah Robinson and Bruce Goff. Robinson was an art teacher at Central High School in Tulsa, and eventually was chair of the art department in the University of Tulsa. Robinson sketched the original ideas for the church. Bruce Goff, formerly one of her high school students, and the architect in 1924-1926 of her home and studio, then took the sketches and came up with the design for the church. Officially, the architecture firm credited is Rush, Endacott and Rush where Goff apprenticed (from age 12 and became a partner in 1930). Like many Art Deco buildings the Boston Avenue Church reveled in the use of various building materials, so metal, glass, terra cotta, Indiana limestone and Minnesota granite can all be found. The exterior is decorated with numerous terra cotta sculptures by the Denver sculptor, Robert Garrison, who had been a student of Adah Robinson

The Meadow Gold Sign has been a Route 66 icon since the 1930’s. Originally located at 11th and Lewis streets along historic Route 66, the huge (30 feet tall) neon sign and structure was constructed around 1934. In 2004 the building it was mounted on was demolished, but the sign was removed, restored and placed on a pavilion at 11th and Quaker. (The relocation was supported by the National Park Service’s Route 66 Corridor Preservation Program.)

Hugh Davis built the Blue Whale in the early 1970s as a surprise anniversary gift to his wife Zelta, who collected whale figurines. The Blue Whale and its pond became a favored swimming hole for both locals and travelers along Route 66 alike. Even though it was constructed much later, the Blue Whale is recognized as a Historic Route 66 Roadside Attraction and Landmark.
﻿ 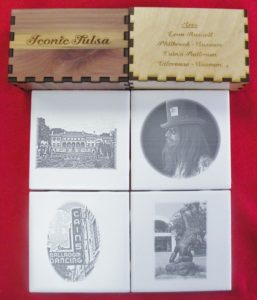 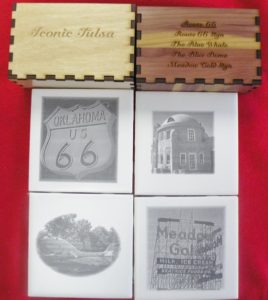 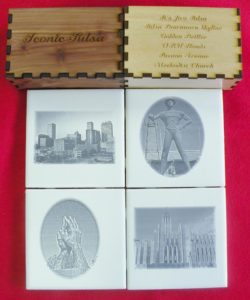 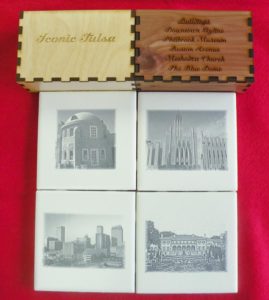 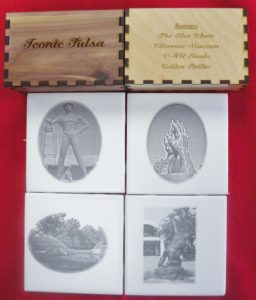 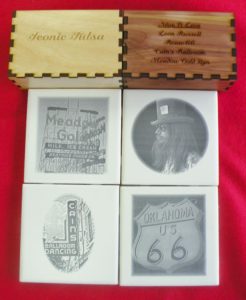